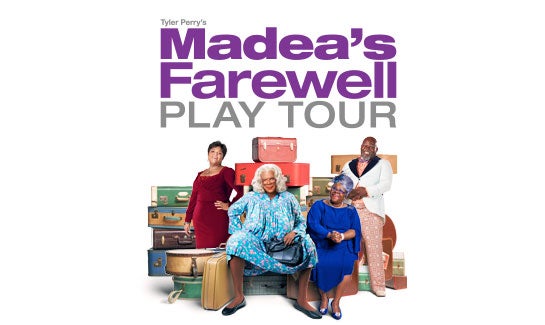 Per tour policy, photography/flash photography and or video recording of any kind is strictly prohibited and patrons are encouraged to refrain from doing so. Any patron that breaches this policy will be given a warning for their first violation. If a subsequent warning occurs, it will result in forfeiture of their seat and removal from the venue without a refund.

At curtain call/conclusion of the play and when Mr. Perry addresses the audience out of costume, is the only time photography/video recording is allowed.

HECKLING/OUTBURSTS/YELLING OUT IS STRICTLY PROHIBITED

Per tour policy, patrons are strongly encouraged to refrain from any form of heckling, outbursts and/or yelling out during the play. Any patron identified as such, will be given a warning for their first violation. If a subsequent warning occurs, it will result in forfeiture of their seat and removal from the venue without a refund.

Perry’s Madea franchise has resonated with its diverse audience with films exploring poverty, race, love and more. Marking Perry’s 21st stage play as the Atlanta grandma, the show stars the original cast including Tamela Mann, David Mann, and Cassi Davis. With the end of the Madea franchise era, and in proper Perry fashion, he wanted to give Madea fans a proper send off. The character, Mabel Earlene “Madea” Simmons, played by Perry himself, first appeared as a 68-year-old in the 1999 stage play, “I Can Do Bad All by Myself,” followed by the play and film, “Diary of a Mad Black Woman.”

It was a simple piece of advice from Oprah Winfrey that set Perry's career in motion. Encouraged to keep a diary of his daily thoughts and experiences, he began writing a series of soul-searching letters to himself. The letters, full of pain and in time, forgiveness, became a healing catharsis. His writing inspired a musical, “I Know I've Been Changed,” and in 1992, Perry gathered his life's savings in hopes of staging it for sold out crowds. With his resources expended, the people never came, and Perry once again came face-to-face with the poverty that plagued his youth. After months spent sleeping in seedy motels and his car, his faith in God only grew stronger. While forging a powerful relationship with the church, he continued to write. In 1998, his perseverance paid off and a promoter booked, “I Know I've Been Changed,” for a limited run at a local church-turned-theatre. This time, the community came out in droves, and soon the musical moved to Atlanta's prestigious Fox Theatre. Perry has never looked back.