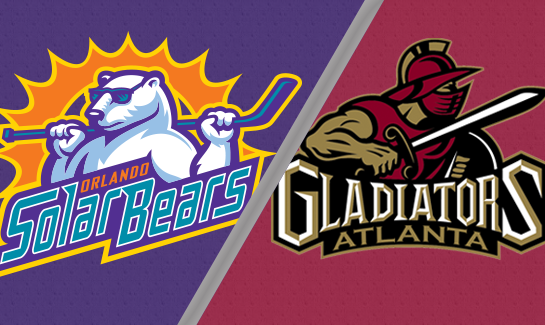 Tickets for the team’s 2019-2020 season are now on sale via Ticketmaster and the Amway Center box office.

The Orlando Solar Bears are the proud affiliate of the NHL’s Tampa Bay Lightning and members of the ECHL, the premier “AA” hockey league in North America. In seven seasons of operation, the team has qualified for the Kelly Cup Playoffs five times. The Solar Bears are owned and operated by the Orlando Magic and the DeVos Family, and play at Amway Center, the 2012 Street and Smith’s Sports Business Journal Sports Facility of the Year.

"Pour some gravy on meee!" 🎸 From all of us at Amway Center, we hope you have a rockin' Thanksgiving! #Thankful #TurkeyDay #Thanksgiving #AmwayCenter
We're hiring for part-time security agents! Apply today and join our award-winning team. Applications close this Friday, Nov 20. Learn more by visiting AmwayCenter.com/ApplyNow.
To all our veterans and their families: Thank you. 🇺🇸 #VeteransDay #AmwayCenter
Over the last two weeks, we welcomed 15,563 Orange County voters into Amway Center to cast their ballot early. If you couldn't join us, there's still time left to find your voting location and go vote! Learn where to vote at www.ocfelections.com #Vote2020 #OrangeVotes #ElectionDay
Today is the last day to vote early here at Amway Center! Join us for a legendary voting experience featuring special guests, ”little to no wait” and ”free parking.” Hurry - polls close at 8pm! 🗳️ Learn more at AmwayCenter.com/EarlyVoting #OrangeVotes #AmwayCenter
Orlando Mayor Buddy Dyer stopped by to cast his vote today and you can, too! Early Voting continues every day from 8am - 8pm until Sunday, November 1, and is open to ALL Orange County voters. 🗳️ More details at AmwayCenter.com/EarlyVoting
[email protected] want to remind you that Early Voting is going on right here at Amway Center, now through Nov 1. All Orange County residents are welcome and free parking is available right across the street! Learn more at AmwayCenter.com/EarlyVoting #DESUSandMERO #EarlyVoting #Orlando
Over 1️⃣0️⃣,0️⃣0️⃣0️⃣ voters have now cast their ballot at Amway Center! 🎉 Join us before early voting ends on Nov 1 for a truly legendary voting experience! 🗳️ #OrangeVotes #AmwayCenter
Don't forget to swing by the team shop after you cast your vote here at Amway Center! The store is open now through this Friday, from 11am to 4pm. 🛍️ More info is available at AmwayCenter.com/TeamShop #AmwayCenter #OrlandoMagic
Want to experience a unique way to cast your vote and avoid long lines this weekend? Join us right here at Amway Center, now through Nov 1 (8am-8pm)! You can also deliver your vote-by-mail ballot in the secure and staffed drive-up ballot boxes along Church St. Plenty of free parking is available! Learn more at AmwayCenter.com/EarlyVoting #AmwayCenter #VoteEarly
Mayor Demings and U.S. Representative Val Demings stopped by Amway Center this morning to cast their ballots! 🗳️ All Orange County residents can come by to vote until Nov 1. Polls are open from 8am to 8pm everyday with little to no wait and there is plenty of free parking available! #EarlyVoting #AmwayCenter #OrangeCounty
It’s the FINAL ROUND of our Ultimate Hispanic Show Showdown! Who will win the crown? Remember, every vote counts, so get involved and make sure your favorite show wins! Vote now at AmwayCenter.com/showdown
And then there were 4️⃣! Just one round remains before we can crown the winner of our Ultimate Hispanic Show Showdown. Cast your vote now and tell us who should make it into the final round! Vote at AmwayCenter.com/Showdown 🗳️ #AmwayCenter #HispanicHeritageMonth
We are proud to announce that Amway Center will host @NCAA @MarchMadness games in 2023! Selected to host a total of 17 NCAA Championships between 2022-2026, our @citybeautiful continues to shine as one of the nation’s premiere sports destinations! #AmwayCenter #MarchMadness #Orlando
This Sunday, Oct 11, join @Lauren_Daigle for an exclusive streaming concert benefitting Hurricane Laura Relief! 100% of proceeds will go directly to people in need via The Price Fund, @SalvationArmyUS and @AmericanRedCross. Grab your tickets at LaurenDaigle.com! #LaurenDaigle #HurricaneLaura #BenefitConcert
The Jimmy Buffett concert, originally scheduled for Dec 5, 2020, is rescheduled to Dec 11, 2021. Tickets will be honored on the new date. If you can't make the new date, a refund will be available at your point of purchase. Learn more at AmwayCenter.com/Updates #AmwayCenter #JimmyBuffett
In honor of National Hispanic Heritage Month, we’re launching our Ultimate Hispanic Show Showdown. Having hosted some of the world’s most revered Hispanic performers, we want to know: "What's the most legendary Hispanic concert hosted at Amway Center?" Help us crown the victor, while we commemorate the achievements and musical contributions of Hispanic artists from around the world. Vote now ➡️ AmwayCenter.com/Showdown #HispanicHeritageMonth #AmwayCenter
Need to register to vote? Join us on Tuesday, Sep 22 from 10 am to 2 pm for our National Voter Registration Day Drive! With appearances by @OrlandoMagic players and coaches, the event is free and open to all Florida residents registering or checking their registration status. 🗳
Word around the office is that not everyone in Orlando has filled out the U.S. Census, yet! The deadline is September 30 - get yours done now by filling it out at 2020census.gov. It takes just a few minutes to complete and ensures our community recieves the proper resources over the next 10 years. #2020Census
Happy Labor Day! #LaborDay #AmwayCenter
We're proud to announce that Amway Center will open as an early voting location! Voters will be welcomed into our Disney Atrium every day from Oct 19 through Nov 1, 8am to 8pm. 🗳️ Not registered to vote? Visit registertovoteflorida.gov today and we'll see you at the polls!
Tonight, our spire lights red along with over 1,500 structures, buildings, clubs, theaters and venues, like @CampingWorldStadium, in solidarity with #RedAlertRESTART. The campaign aims to raise public awareness about the RESTART Act and support the health of the live event industry. #WeMakeEvents