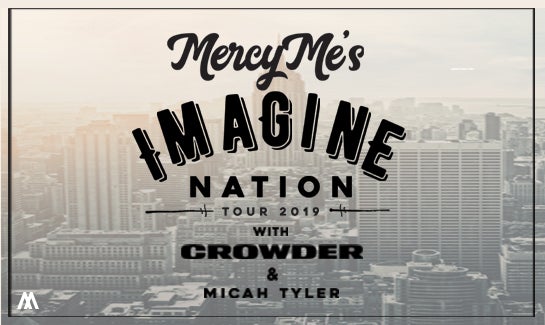 It has been a landmark year for MercyMe. The band has garnered their seventh AMA nomination and two GMA Dove Award nominations, including Artist of the Year and a People’s Choice Award for, “I Can Only Imagine.” Also, “I Can Only Imagine,” the major-motion picture based on the life of frontman, Bart Millard, whom also wrote the mega-hit song, “I Can Only Imagine,” after the loss of his father, made its box office premiere at number three (Lionsgate, Roadside Attractions). At this year’s Billboard Music Awards, MercyMe was named Top Christian Artist and took top honors at the K-LOVE Fan Awards, earning awards for Group of the Year and Song of the Year for “Even If.”

Since the band’s debut in 2001, MercyMe have sold more than nine million units in CD, single and DVD sales, amassed more than 57 number one multi-format radio singles and four consecutive mainstream radio hits with, “I Can Only Imagine.” In 2009, Billboard namedMercyMe the number one Artist of the Decade in both the Christian Songs and Christian AC Songs categories and their single, “Word Of God Speak,” the number one Song of The Decade and recognizes them as one of the industry’s most notable talents. In 2014, MercyMe made history as, “I Can Only Imagine,” surpassed two million digital downloads, making it the first song in Christian music to go platinum and double-platinum in the digital domain. Their first major-label studio album, “Almost There,” recently received triple-platinum certification from the RIAA. The band’s eighth studio album, the RIAA-Certified Gold, “Welcome To The New,” earned two Grammy® nods and four radio hits. “Lifer,” their latest chart-topping, GMA Dove Award-winning and Grammy®-nominated album, includes the RIAA-certified gold, Grammy®-nominated smash hit, “Even If,” which dominated the Billboard and Mediabase radio charts with a 19-week streak at number one.

Don't miss out! New tickets have been released for the @ShawnMendes concert here in Orlando on Oct 12. Get your tickets to the show now. 🎤 ⚡ #WonderTheWorldTour 🎫 : AmwayCenter.com/ShawnMendesTickets
Get your ugly sweaters ready, our annual TSO Ugly Sweater contest is back. Show us a picture of you rockin' that ugly sweater for a chance to win tickets to the @TransSiberianOrchestra show here on Dec 18! 🎸 Enter to win ➡️ AmwayCenter.com/UglySweaterContest
Can’t wait to hear some of @CarlosVives ‘Canción Bonitas’ tonight! 🚪: 6 PM 🎵: 7 PM 🎫 : AmwayCenter.com/CarlosVivesTickets
We welcome @Farruko to Orlando for his LA167 tour! 🚪: 7 PM 🎵: 8 PM 🎫 : AmwayCenter.com/FarrukoTickets
Get ready to see @KaneBrown_Music and some of his 'Famous Friends' tonight here in Orlando! 🚪: 6 PM 🎵: 7 PM 🎫 : AmwayCenter.com/KaneBrown
On Sale Now: @Eagles are performing their iconic "Hotel California" album in its entirety at Amway Center on Feb 24. Buy your tickets today at AmwayCenter.com/Eagles! #AmwayCenter #Eagles
Mark your calendars! @ShawnMendes will be here in Orlando on Oct 12, 2022. What song are you most excited to hear? ❤️ ⚡ 🎫 : AmwayCenter.com/ShawnMendesTickets
Catch @BensPlatt's performance of his hit song 'I Wanna Love You But I Don't' today on Ellen. See him perform it live here in Orlando on Feb 23, 2022!
Our Cyber Monday deals start now! Save on tickets to see some of your favorite artists, like Nicky Jam and Eric Church, during our biggest sale of the year. Hurry - this offer ends tonight at midnight. #CyberMonday Save now ➡️ AmwayCenter.com/CyberMonday
Happy Thanksgiving from our Amway Center family to yours! 🦃 ❤️ #AmwayCenter #Thanksgiving
JUST ANNOUNCED: @Eagles are performing their iconic "Hotel California" album in its entirety at Amway Center on Feb 24! Tickets go on sale Friday, Dec 3 at 10am. Learn more at AmwayCenter.com/Eagles. #AmwayCenter #Eagles #HotelCalifornia
Don't miss out! Watch @KaneBrown_Music perform "One Mississippi" live at the American Music Awards this Sunday, Nov. 21. There will even be a special BTS feature. #KaneBrown #AMAs
It's time! Tickets are on sale now to Journey's Freedom Tour 2022 with very special guest TOTO at Amway Center on April 21. Get your tickets before they're gone at AmwayCenter.com. See you there. #AmwayCenter #Journey
On Sale Now: @JuanLuisGuerra returns to Orlando on June 4, 2022 with his Entre Mar y Palmeras Tour. Tickets are on sale now at AmwayCenter.com! 🎸 #AmwayCenter #JuanLuisGuerra
Join us tomorrow from 11am to 3pm for the largest job fair in the southeast! Meet over 135 employers looking to fill 8,500 jobs and take advantage of free career resources like headshots, resume reviews, and more. Register now at events.orlandojobs.com! #OrlandoJobs #JobFairOrlando #AmwayCenter
Christmas arrived early! Good seats for @ChrisStapleton have been released for his All American Road Show tonight. 🤠 🚪: 6 pm 🎶: 7 pm
Journey is back! Come see them on the Freedom Tour 2022 with very special guest Toto at Amway Center on April 21. Tickets go on sale Friday at 10am. Come rock with us!
Get ready to see the six-time Grammy award winner @JamesTaylor_com with @JacksonBrowne tonight in Orlando! 🎸 🎶 🚪: 6:00PM 🎵: 7:30PM 🎫: AmwayCenter.com/JamesTaylor
Just Announced: @JuanLuisGuerra is coming back to Orlando's Amway Center on June 4, 2022! Tickets go on sale Friday, November 19 at 10 am. 🎸 #AmwayCenter
We have been waiting The Longest Time since he last performed in Orlando. Now he's back. @BillyJoel comes to @CampingWorldStadium on March 12, 2022, for his ONLY stadium show in Florida. Tickets on sale now at CampingWorldStadium.com/BillyJoel 🎹 #BillyJoel
Catch everyone's favorite Piano Man, @BillyJoel, sing us a song live at @CampingWorldStadium during his ONLY stadium show in Florida! Tickets to his March 12 show go on sale this Friday at 10am. Learn more at CampingWorldStadium.com/BillyJoel. 🎹
@KaneBrown_music is performing his song with @ChrisYoungmusic “Famous Friends” tonight on the CMAs! Tune in at 8pm EST on ABC to watch it live and then see Kane Brown right here in Orlando on Dec 3. #KaneBrown #CMA