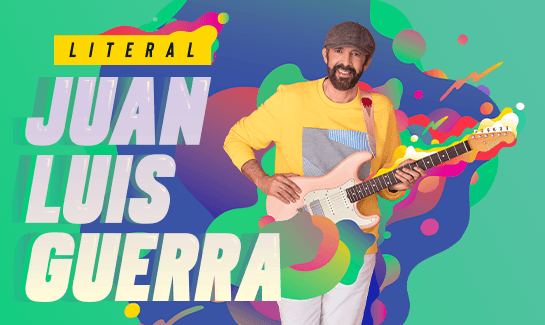 Two-time Grammy® and 18-time Latin Grammy® Award-winner Juan Luis Guerra and his band 4.40, announced his Literal Tour. Presented by the entertainment, marketing, media and live events company Loud and Live, the tour kicks off on Thursday, September 26 in Boston and includes a stop at Orlando’s Amway Center on Sunday, October 27. Tickets on sale now!

“It is a great honor for us to collaborate and partner with globally-respected and beloved artist, Juan Luis Guerra,” said Loud and Live CEO Nelson Albareda. “We are also very excited for all of his fans to experience the music legend’s new music as well as his greatest hits,” added Albareda.

On April 25, Dominican singer, songwriter, producer Guerra will be honored with the Billboard Lifetime Achievement Award in recognition for his 35-year musical career. He has become a living legend while transcending bachata, the music of his native Dominican Republic, to increasing international popularity. He has produced 15 albums and sold over 30 million records worldwide. On the Billboard Hot Latin Songs chart, he had 42 titles and six hit number one; on the Latin Airplay chart, he scored 27 titles, six went number one; on the Tropical Songs airplay, he charted 26 titles and 11 went number one; on the Top Latin Albums chart, he charted 15 hits and three went number one and on the Tropical Albums chart, seven topped the list. During his illustrious career, he has won myriad of awards. In 2010, Guerra won three Latin Grammy Awards, including Album of the Year and in 2012, he won a Latin Grammy Award for Producer of the Year.

Guerra is one of the most internationally recognized Latin artists. He is most widely known for his style of merengue and Afro-Latin fusion, though he does not limit himself to one brand of music, rather he blends a variety of rhythms including merengue, bachata-fusion, balada, salsa, rock and roll and gospel. The revered artist of such popular classics such as, “La Bilirubina,” “Ojalá Que Llueva Café,” “Visa Para Un Sueño,” “Las Avispas,” and “Niagara en Bicicleta,” to name a few, will perform his greatest hits and new songs, along with recently released, “Kitipun.” The infectious bachata is his first single in four years from his upcoming album due out later this year