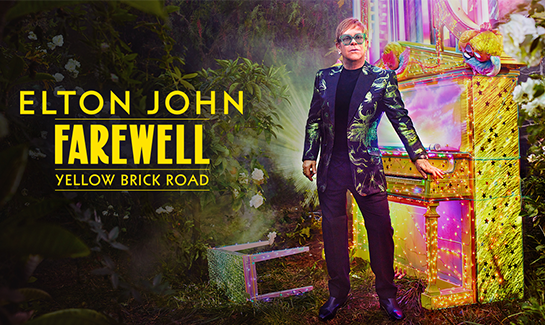 Concert tickets for the originally scheduled show will be honored on the new date. Please note that if you purchased parking in Amway Center’s Geico Garage you may keep your parking pass receipt/ticket and use it for the new date.

Elton's "Farewell Yellow Brick Road" tour stop in Central Florida was called off at show time. Elton quickly took to social media to state “I’m so deeply sorry to everyone attending the shows in Orlando last night and Tampa tonight. I have been on a course of antibiotics to combat an ear infection and it was expected that these would clear the infection up in time for me to play in Orlando.  I travelled to the venue in preparation for the show, but after further consultation with doctors before taking the stage, the decision had to be taken on their advice that I still wasn’t well enough to perform. We always play 100% live and with impaired hearing and ear pain, I wouldn’t have been able to deliver the performance that my fans deserve.  I absolutely hate letting my fans down and it was an incredibly hard decision to make.  Thank you for all your patience and support”.

With the assistance of the Amway Center, the show was rescheduled into the end of the March run in 2019.  "We are very grateful Elton John and his team were able to work with us to reschedule the concert on his farewell tour so he can play all his hits for his Orlando fans. We welcome his return to the Amway Center in March," said Allen Johnson, Chief Venues Officer of Orlando Venues.

Want to experience a unique way to cast your vote and avoid long lines this weekend? Join us right here at Amway Center, now through Nov 1 (8am-8pm)! You can also deliver your vote-by-mail ballot in the secure and staffed drive-up ballot boxes along Church St. Plenty of free parking is available! Learn more at AmwayCenter.com/EarlyVoting #AmwayCenter #VoteEarly
Mayor Demings and U.S. Representative Val Demings stopped by Amway Center this morning to cast their ballots! 🗳️ All Orange County residents can come by to vote until Nov 1. Polls are open from 8am to 8pm everyday with little to no wait and there is plenty of free parking available! #EarlyVoting #AmwayCenter #OrangeCounty
It’s the FINAL ROUND of our Ultimate Hispanic Show Showdown! Who will win the crown? Remember, every vote counts, so get involved and make sure your favorite show wins! Vote now at AmwayCenter.com/showdown
And then there were 4️⃣! Just one round remains before we can crown the winner of our Ultimate Hispanic Show Showdown. Cast your vote now and tell us who should make it into the final round! Vote at AmwayCenter.com/Showdown 🗳️ #AmwayCenter #HispanicHeritageMonth
We are proud to announce that Amway Center will host @NCAA @MarchMadness games in 2023! Selected to host a total of 17 NCAA Championships between 2022-2026, our @citybeautiful continues to shine as one of the nation’s premiere sports destinations! #AmwayCenter #MarchMadness #Orlando
This Sunday, Oct 11, join @Lauren_Daigle for an exclusive streaming concert benefitting Hurricane Laura Relief! 100% of proceeds will go directly to people in need via The Price Fund, @SalvationArmyUS and @AmericanRedCross. Grab your tickets at LaurenDaigle.com! #LaurenDaigle #HurricaneLaura #BenefitConcert
The Jimmy Buffett concert, originally scheduled for Dec 5, 2020, is rescheduled to Dec 11, 2021. Tickets will be honored on the new date. If you can't make the new date, a refund will be available at your point of purchase. Learn more at AmwayCenter.com/Updates #AmwayCenter #JimmyBuffett
In honor of National Hispanic Heritage Month, we’re launching our Ultimate Hispanic Show Showdown. Having hosted some of the world’s most revered Hispanic performers, we want to know: "What's the most legendary Hispanic concert hosted at Amway Center?" Help us crown the victor, while we commemorate the achievements and musical contributions of Hispanic artists from around the world. Vote now ➡️ AmwayCenter.com/Showdown #HispanicHeritageMonth #AmwayCenter
Need to register to vote? Join us on Tuesday, Sep 22 from 10 am to 2 pm for our National Voter Registration Day Drive! With appearances by @OrlandoMagic players and coaches, the event is free and open to all Florida residents registering or checking their registration status. 🗳
Word around the office is that not everyone in Orlando has filled out the U.S. Census, yet! The deadline is September 30 - get yours done now by filling it out at 2020census.gov. It takes just a few minutes to complete and ensures our community recieves the proper resources over the next 10 years. #2020Census
Happy Labor Day! #LaborDay #AmwayCenter
We're proud to announce that Amway Center will open as an early voting location! Voters will be welcomed into our Disney Atrium every day from Oct 19 through Nov 1, 8am to 8pm. 🗳️ Not registered to vote? Visit registertovoteflorida.gov today and we'll see you at the polls!
Tonight, our spire lights red along with over 1,500 structures, buildings, clubs, theaters and venues, like @CampingWorldStadium, in solidarity with #RedAlertRESTART. The campaign aims to raise public awareness about the RESTART Act and support the health of the live event industry. #WeMakeEvents
Congratulations to Allen Johnson, our Chief Venues Officer, on winning the “Executive of the Year” SPORTY Award from @greaterorlsport tonight. Well deserved! #SPORTYS
‪Go big - even when they aren’t home! Who’s ready for another win tonight? 🏀‬ #MagicPlayoffs #AmwayCenter‬
Amway Center ➡️ @WWE ThunderDome 💪 Witness the transformation this Friday on #SmackDown! You can learn about the all-new, state-of-the-art WWE viewing experience by clicking the link in our bio. #AmwayCenter
64 legendary concerts went head-to-head across 6 rounds of competition with an impressive voter turnout of over 8,500. It was a true battle till the end between two chart-topping titans, and Orlando has chosen its victor! @JustinTimberlake’s Man of the Woods Tour has been crowned our Most Legendary Show of the Decade! This 10-time Grammy winner crushed our 2018 ticket-sales record and told his competitors to “Cry Me a River!” Congrats, JT, and thank you Orlando! #AmwayCenter #MOTWTour #JustinTimberlake
It’s the CHAMPIONSHIP MATCH of Amway Center’s Ultimate Show Showdown! Who will reign supreme as our most legendary show of the last decade? Remember, every vote counts, so get involved and make sure your favorite show is crowned champion! 👑 Vote NOW: AmwayCenter.com/Showdown
Dan + Shay just released their new song, "I Should Probably Go To Bed!" Check it out today - streaming everywhere. 👏🥳🔊
The Joe Rogan show, originally scheduled for Aug 15, is rescheduled to Saturday, August 28, 2021. Tickets will be honored for the new date. If you can’t make the new date, a refund will be available by contacting your point of purchase. Visit livenation.com/refund for more information.