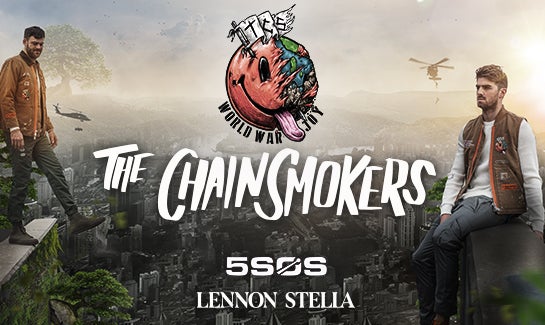 The tour announcement comes on the heels of The Chainsmokers’ latest single, “Who Do You Love” featuring 5 Seconds of Summer. Released last week via Disruptor Records / Columbia Records, the track immediately shot to number one on iTunes and has already accumulated nearly 14 million combined global streams to date. Additionally, the track was added to Spotify’s New Music Friday playlist in 37 countries and to their largest playlist, Today’s Top Hits as well as to Today’s Hits on Apple Music.

The Chainsmokers have developed some of the biggest breakthrough songs over the last two years including multi-platinum certified hits, “Roses” featuring Rozes, “Don’t Let Me Down” featuring Daya and “Closer” featuring Halsey, which went on to become the longest-running number one single of 2016 on the Billboard Hot 100 chart. The group’s debut album, “Memories…Do Not Open,” was certified platinum. The album debuted at number one in the U.S. on the Billboard 200 chart and produced multi-platinum certified smash hits, “Paris” and “Something Just Like This” featuring Coldplay. Released late last year, the duo’s second studio album, “Sick Boy” generated over one billion worldwide streams to date and includes hit single, “This Feeling” featuring Kelsea Ballerini.

In 2012, the 19-year-old Canada native Lennon Stella first gained national attention when she and sister Maisy’s cover of Robyn’s, “Call your Girlfriend” went viral (their YouTube channel has over 100 million views and nearly 800,000 subscribers.) That same year, Lennon landed her starring role in the hit television show, “Nashville” as Maddie Conrad. In 2018, Lennon signed her first label deal with RECORDS LLC. / Columbia Records. Last November, she released her debut solo extended play (EP), “Love, me,” which debuted in the top five of Billboard’s Heatseekers Album chart. Lennon has been featured in various year-end lists and was named one of Refinery29’s Young Celebrities to Watch in 2019.

The premiere of @BlakeShelton's new show, #Barmageddon is TONIGHT at 11pm on USA Network! Bar games, music, and laughs - what more could you ask for? 🍻 We can’t wait to cheer on Blake when he comes to Amway Center on March 4! 🙌 Tickets on sale now for the Back to the Honky Tonk Tour. Use the link in our bio to get yours!
🇺🇸💪 #UFCOrlando #AmwayCenter
It’s going to be an action-packed night at #UFCOrlando. 👏 Get your tickets at 🔗AmwayCenter.com
This DEAL ends at MIDNIGHT! Use code 'DEAL' to save $30 on select tickets to the 2023 Men's Basketball First/Second Rounds in Orlando. Link in bio for tix.
UFC weigh-ins will be held inside #AmwayCenter Friday, DEC 2. Doors open at 3 p.m. This event is free to the public and does not require a ticket.
SHOW ANNOUNCE 📣 | Spend Valentine's Day at Amway Center with Jay Wheeler during his Emociones World Tour. Tickets on sale Thursday, DEC 1 at 10 a.m.
Get your tickets for these games and more using the link in our bio. 🎟️
Daddy Yankee returns to Amway Center next month with his La Última Vuelta World Tour. You have two chances to see the King of Reggaeton. 👇 🗓️ DEC 18 | 7 p.m. 🗓️ DEC 19 | 8 p.m. 🎫 Link in bio
This Thanksgiving Day and always, we're thankful for all of you! 💙
Can you guess what concert we're at? 🦈
@rauwalejandro brought the energy to #AmwayCenter last night! 🎤🎶 #TrulyLegendary
The countdown to #UFCOrlando has begun! 🗓️ Sat. Dec 3 📍 Amway Center 🔗 AmwayCenter.com
Tickets are on sale now to see #BarryManilow during his Hits 2023 Tour! 🎫 Link in our bio for additional details.
New wheels have arrived at the @kiausa Terrace. 👀 #AmwayCenter
Have y’all gotten your tickets to see @ThomasRhett during the #HomeTeam tour yet? 🎫 Get yours using the link in our bio.
ONE NIGHT ONLY | @BarryManilow brings his Hits 2023! Tour to Amway Center on January 17. ✨ Tickets on sale Friday, November 18 at 10 a.m. Link in bio for more info.
Did you know you have two chances to see @trans_siberian at #AmwayCenter this December? 🗓️ : December 17 ⏰ : 3:00 PM ⏰ : 7:30 PM 🎫 : bit.ly/3E8j1to
Thank you, Christian @nodal for an unforgettable night. Your performance was #TrulyLegendary! 💚 #ForajidoTour #FORAJIDO
The Slight Return tour is coming to Amway Center on November 19. Limited tickets remain. Secure your seats using the link in our bio!